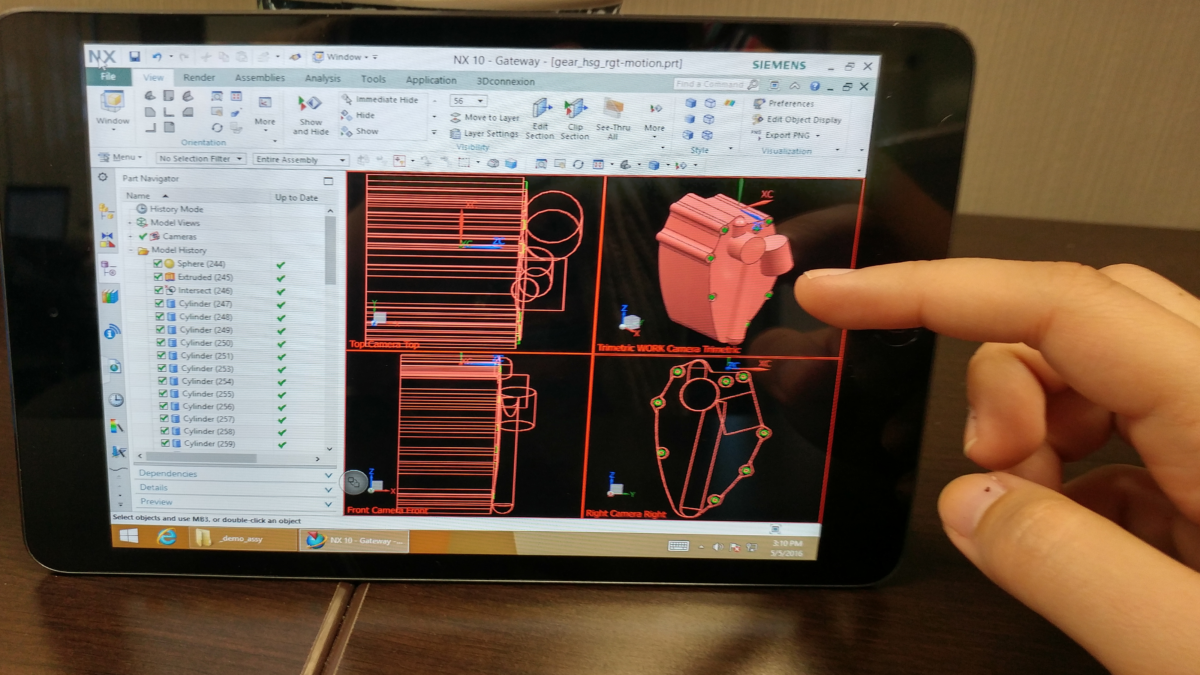 Saratech has been testing out the new AMD Multiuser GPU (MxGPU) technology with the Siemens NX™, Femap, and Teamcenter® products.  We always find it interesting to test out the latest hardware technology with the Siemens suite of PLM products. Today, a common PLM environment has high powered workstations for each user. That gives the user the power necessary to run high end PLM applications, but this has downsides for collaboration among groups of engineers, version control, data duplication across multiple sites, and a higher potential for data security breaches.

With this new AMD MxGPU technology, the data can be secured at a central site and shared among users at multiple locations. But unlike the old days of virtual environments, AMD is now offering the world’s first hardware-based virtualized GPU solution. That allows multiple users on a single server to have the high performance CPU computing and graphics capability necessary to run applications such as NX in a virtual solution. Only the pixels are transferred to the local thin client. The server hardware can be placed in a central location, making it much easier to perform data backups, OS and application updates, and hardware updates. If a specific user needs more RAM, that could be done with a configuration setting on the central server. No need for an IT person to go out to a remote site to access a user’s workstation.

This new solution offers support for both OpenGL hardware graphics acceleration, and OpenCL compute performance for applications that support using the GPGPU as a hardware accelerator, such as NX Nastran.

We have had two engineers in separate locations in Florida running NX, Femap, and Teamcenter from a Dell server with the new AMD FirePro S7150 GPU located in Southern California. Both engineers reported great performance with the Siemens software products even though the server was located across the country. They could also access their environment from multiple locations, even at a customer site. With the latest release of Siemens’ PLM Software portfolio, AMD MxGPU technology is now certified and brings to design and manufacturing the benefits of virtualization. Saratech will be continuing to test this virtual solution to gain more experience in this environment.

A single server running Siemens design applications on AMD MxGPUs can support multiple engineers, working wherever they need: at the office, home or, most importantly, the client site. AMD’s new technology brings physical workstation-grade 2D and 3D graphics acceleration to the datacenter. Moving valuable datasets and models from local workstations and laptops to the datacenter eliminates the need to store and transfer multiple copies. This simplifies version control, which boosts productivity and fosters collaboration among local and remote teams. This can also make it easier to deploy PLM data management solutions such as Teamcenter®. IT departments no longer need to support individual workstations with multiple hardware, OS, and application configurations. Users simply log in to their virtual desktops at any time from any supported device and receive full workstation performance and GPU acceleration. By supporting and certifying virtual desktops running on AMD MxGPU technology, Siemens PLM Software empowers customers to use their preferred design, engineering or manufacturing solution such as NX™, Tecnomatix®, or Teamcenter®.